Share a memory
Obituary & Services
Tribute Wall
Read more about the life story of Sherry and share your memories in the Tribute Book.

Sherry Ann McGill Jamison was born March 8, 1947 in Kingstree, South Carolina to the late Esther Belle Ervin and Burgess McGill. She was the 9th of their 10 children. After the passing of her father Sherry went to live with her paternal grandmother Rina Scott McGill at the age of three. She attended and was baptized at St. Mark African Methodist Episcopal Church in Kingstree, South Carolina. Affectionately known as “Shekie” and Sherry Ann by family and friends, she often shared stories of the many relatives she and “Grandma” would visit throughout the area.

While in Baltimore, Sherry attended Coppin State University where she studied Elementary Education. She would frequently visit St. James United Methodist Church with her aunt and other family members and it was there where she met the love of her life Preston Jamison. When Preston went to Vietnam to serve in the Army, Sherry would write him letters. From this courtship the two began dating in 1968. On August 31, 1969, Sherry and Preston were married at St. James United Methodist Church in Baltimore, Maryland. From this union came three sons Burrell, Derrick, and Byron.

Preston‘s military assignments took the family to Georgia, Maryland, Virginia, and various parts of Germany. In 1985, Preston was assigned to Walter Reed Army Medical Center in Washington DC, and the family relocate from Germany to Wheaton, MD. Sherry worked for the federal government for 34 years and retired from the Material Division at Walter Reed National Military Medical Center in December 2011.

After visiting various area churches, the family became members of Allen Chapel AME Church in Silver Spring, Maryland. During her later years Sherry became more active in the church joining the Nettie Norris Women’s Missionary Society, the Women’s Ministry, and the Burning Bush Ministry which she would later serve as president until her passing.

As good health was such an important part of her life, she shared many of the health challenges she faced with family and friends to help them deal with them if they arose. She was a huge champion of diabetes education and shared best practices with any family member who became impacted by the disease.

Sherry enjoyed many things including sewing, cooking, baking, ceramics, crafting, traveling and coloring just to name a few. Not long after its inception in the late 1980s she became an integral part of the Scott-McGill Family reunion planning committee. She had a kind, loving heart and was willing to help and give to anyone in need. Whether it was her time, talent, treasure or a listening ear you could always count on her.

NOTE: COVID screening and social distancing protocols will be in place at the Homegoing service. Please complete the COVID survey after 9:00 am on Sunday, May 22, 2022.

In lieu of flowers donations can be made in her honor to:

The American Diabetes Foundation or

To send flowers to the family or plant a tree in memory of Sherry Ann (McGill) Jamison, please visit our floral store. 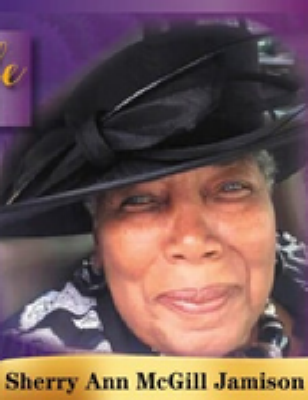